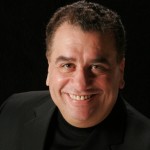 I became interested in hypnosis simply because I wanted to live a better life… and, I knew hypnosis could help me. In 1981 I was playing in a comedy show band performing in top resorts, colleges, comedy clubs, and for major corporations.  My band was very popular and we were always performing in some of the country’s finest resorts.  It was a great life for a young man and I had no complaints, but then in the summer of 1981, things got a little weird. We were booked for two months in Virginia Beach and life was good. Nights were spent entertaining tourists, and days were spent doing “touristy” things.

We were off one night a week and on those nights we’d see other entertainers.  One night, I saw the most amazing show ever.  We were just finishing our meal at a great restaurant and the waiter asked if we were going to see the comedy hypnotist show? A hypnotist show, what’s that all about? How is a hypnotist supposed to be funny, we wondered?  We were skeptical but decided to check it out, anyway.

It turned out to be an excellent show presented by a very popular stage hypnotist, named Sam Vine. And, that night everything changed for me.  He had people performing in all kinds of hilarious routines and I was totally blown away by what I witnessed!

It turns out there are no secrets to success… there are just laws waiting to be discovered. My discovery happened when I met my great teacher, Dr. Joseph Panoor from Kerala, India.  Joe was a hypnotist, psychologist, teacher, and the greatest mentor I ever had.  I enrolled in his Basic Hypnosis Class for Therapists and I absolutely loved everything about hypnosis.

Soon after training with Dr. Joe, I began working with clients who wanted to change their own lives. At night, I would perform music and hypnosis and in the daytime I would work privately with clients. I’ve personally hypnotized thousands of people who have benefited from the natural healing that hypnosis provides, both in shows and in private sessions.  I’ve traveled all over the world entertaining for corporations, colleges, military, high schools, and private events.